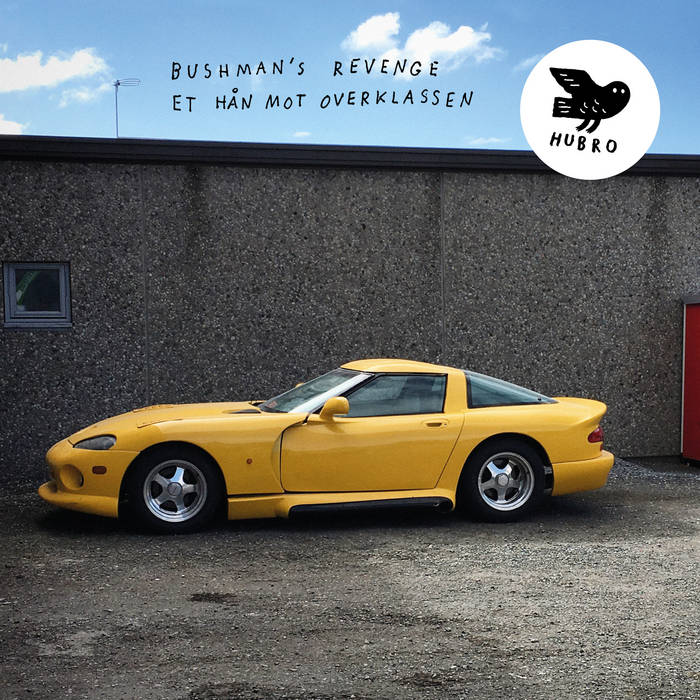 I can’t seem to select it but ‘ Hei Hei Martin Skei’ is my fave track. They’re all great. Favorite track: Happy Hour For Mr. Sanders.

The debut Hubro album by the highly regarded Norwegian trio Bushman’s Revenge - underground stars of the Rune Grammofon label for a decade - operates on several levels. After a hypnotic experimental prelude that creates a sort of audible weather system, with the delicate, bare-wire glissandos of Even Helte Hermansen’s soprano guitar heard against Gard Nilssen’s beaten percussion and the elegantly dancing measures of Rune Nergaard’s electric bass, ‘Et Hån Mot Overklassen’ (which Google Translate renders as “A Mockery of the Upper Class’) begins to settle. The instruments sound pretty much like guitar, bass and drums are meant to do, and the opening numbers follow a recognisable model of theme/improv/theme.

Then, as the long, riverine meanders of guitarist Even Helte Hermansen get into their stride, and the effects-pedal expressionism of his chosen settings thickens timbres into a growling axe-attack, things become chewier and more challenging. It’s like Cream playing Coltrane (Alice or John), remixed by Arne Nordheim or Karlheinz Stockhausen. By the time you get deep into the heart of the album, past rumbling audio-sculptures, tamboura drones, found-sound samples, the twangy blues jam and a soaring gothic soundscape, it can be hard to be sure where one instrument ends and another begins. The overall ambiance might also seem closer to a film soundtrack or art installation than a normal collection of tunes. It’s a kind of sonic journey, moving the art of the trio on to the contemporary zeitgeist of noise, drones and filmic FX.

Although this is very much a trio album rather than a guitar showcase, Hermansen’s shockingly comprehensive skills and nifty customised hardware can’t help but join the dots connecting several disparate reference points, from historical guitar heroics to Sonic Youth to contemporary noise bands. The range of influences also travels a long way from the usual jazz and rock signifiers, to the Beatles’ ‘White Album’, say, the film scores of Ennio Morricone, and the experiments of Supersilent or Jan Johansson. By the end, Bushman’s Revenge - whose 2012 album ’Never Mind the Botox’ irreverently mixed together tunes by Ornette Coleman, The Pixies, Black Sabbath and Sun Ra - remind you of no one so much as themselves. Convincingly, the trio have created their own distinctive signature: a genre of one.

They also sound very much like one combined instrument rather than three separate parts, notwithstanding the guitar’s prominence as the natural lead voice. In short, Bushman’s Revenge produce ensemble music par excellence. Given the group’s relative longevity, this is hardly surprising. From their 2007 debut album on the Jazzaway label, ‘Cowboy Music’, to a further eight titles for Rune Grammofon, Bushman’s Revenge have retained the same personnel. And as they’ve gone on, they’ve got better, tighter, and more in tune with each other. Because they started so young, they are also genuine veterans at an indecently early age (Hermansen is 37, Nergaard and Nilssen, 36). Clearly, by the time they got to ‘Et Hån Mot Overklassen’, in early 2018, they were flying.

Recorded at Oslo’s Amper Tone Studio by Johnny Skalleberg, mixed there by Bard Ingebrigtsen, and produced collectively by the band, the album sounds suitably immersive, confidently maintaining continuity over the whole span of ten original compositions. It is also an unusually subtle recording, and a significant departure from their earlier roots, damping down heavy electrics into what the band describe as a quieter, almost semi-acoustic style.

Unlike some previous Bushman’s Revenge albums, there are no special guests, but the normal paramenters of the trio are expanded through the inclusion of several other instruments, with drummer Nilssen doubling vibes and Wurlitzer electric piano while bassist Nergaard covers organ, toy piano and percussion. Hermansen plays percussion as well as his barrow-load of guitars, and all three members add ‘electronics’. Pleasingly, ‘Et Hån Mot Overklassen’ ends as it began, with a lyrical, electronically enhanced prelude leading into a sensitively played jazz tune. We have come full circle.

Bandcamp Daily  your guide to the world of Bandcamp

Featured sounds by K.Spark and WIZDUMB, plus Basi joins the show to discuss his latest release.